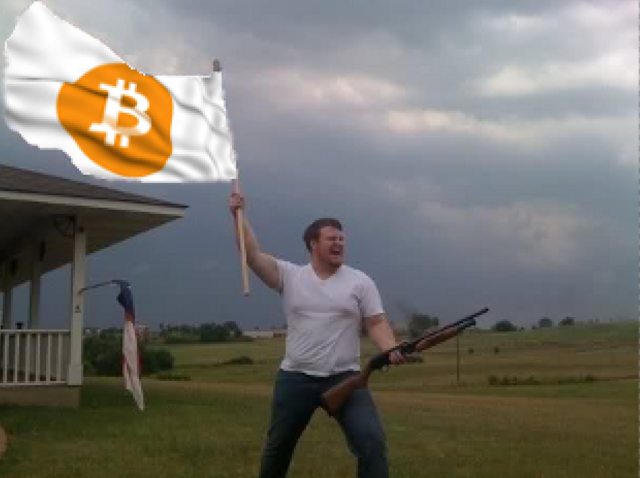 Just like Moore's Law predicted back in 1965 that computing power would double every 12 to 18 months, we are now witnessing the transaction counts for doubling on bitcoin at an even higher frequency.

Given that we are basically at maximum capacity already this means that if we were to scale on chain, the block size would have to double at that rate, leading to 8 MB blocks well before the next block reward halving and 128MB blocks before the halving after that or even sooner.

On chain scaling simply is unrealistic. The argument that segwit doubles the block size is besides the point because scaling the blockchain gets us nowhere. Doubling the block size does not buy a lot of time. Only secure, off-chain transactions (aka Layer 2 systems) can deliver on the promise of a large scale, worldwide, decentralized, secure system of money. And the most important aspect of SegWit is that it enables Layer 2 systems.

Miner refusal to activate segwit, which fixes the bug that prevents effective deployment of layer 2 solutions is the primary menace holding back bitcoin and, quite frankly, holding back the world's access to the future of money.

There are two paths to proceed with that have been making the top of this week's submissions: UASF and compromise of SegWit + 2MB blocks.

In fact, it took only 2 days of advocacy for UASF to bring the compromise recommendation out in full force.

We should not give up on either of these. Because actions speak louder than words, there is really no guarantee that Bitmain will actually ever accept SegWit even if the compromise solution is proposed once more. I welcome users to pledge to upgrade to a 2MB hard fork if SegWit is activated. If this gets Bitmain to signal for SegWit, then I say "fantastic". If this doesn't actually bring about miner activation of SegWit, however, before the August 1st flag day for UASF, then I think it's clear that BitMain is pursuing short term fees at the expense of long term viability of Bitcoin, and we can cut them off of fees until they activate SegWit by ourselves activating it using the UASF.

Remember, the UASF does nothing new if miners signal in favour of segwit before its flag day.

So I call on every user, those in favour of and those against big blocks to run the UASF clients and declare for or against bigger blocks as a following step. If we begin with SegWit, we get a bigger block from it (which is purely a temporary stopgap to deal with the next few months of volume) and the ability to deploy layer 2 solutions. Advocating for only bigger blocks only is a stopgap measure that leads to the same dead end we are already at.

As soon as segwit activates we can have a healthy discussion about how to build consensus around a hard fork. And the urgency will still be there to discuss it as bitcoin's growth will only accelerate once SegWit activates.

My concern with expecting a compromise to get approved in any short period of tie is that there are too many parties with too many conflicted motives with too much language barrier and too many details to expect a negotiated settlement to arrive in any reasonable time frame.

There is nothing to lose by activating SegWit as soon as possible and keeping the debate about bigger blocks going. The UASF moves the community of all those constituents forward towards the necessary requirements of the future. If any one particular miner does not wish to be a part of that future, they have to be left behind, but not forever. They can rejoin at any time they choose.


Let's move forward. Let's activate SegWit by requiring all blocks to signal for it by August 1st via UASF. Let's make the future of money possible for the whole world.

BitcoinXio, why are you still abusing your mod status and give me -3 reputation for every post that i make? you should resign from your position! i though that this is an open forum but i see censorship every day and most of the times BitcoinXio is the main actor of this censorship!

Again, please do point out how and where censorship is occurring.

I have asked you to do this many times and you have failed to do so. You are screaming "censorship" yet refusing to provide examples, not unlike a petulant child stamping his foot because he doesn't like what other people are saying or doing. Perhaps you simply refuse to provide evidence because there is no evidence to provide? If that is not the case, please provide evidence of censorship and I will take steps to combat such censorship.

I have included below the post I linked in my comment above to make it easier for the discussion on 'censorship' which you started to continue, as that is what you seem to be hung up on - again, if you wish to combat censorship please provide examples of it and please do take the time to answer everything below; of particular interest to me is whether or not you'll now try to combat the censorship occurring on bitcointalk and /r/bitcoin, or whether you'll continue to make a hypocrite of yourself:


BitcoinXio is still abusing hid mod status because every post that i make is downvoted. Is that the free forum that you talk about? For me that is suppression of a different opinion = censorship! Why is that okay?

There is no 'downvoting' or 'upvoting' here, merely a 'reputation system' which any user can use to indicate that they agree or disagree with a post. The visibility of your post is not affected (so this does not result in those posts being hidden as it does on Reddit, for instance), nor is its position altered. Thus it has no impact on freedom of speech and this remains the "free forum that talk about", yes.

Indeed, though it may come as a shock to you because you have so clearly selectively forgotten that you also engage in doling out negative reputation, you have been engaging in the same behaviour against BitcoinXio and others. Shocking, eh!! I will gladly post those logs here publicly which show you to be engaging in this, if you so desire.

So again, please do point out how your opinion is being suppressed or censored and I will take steps to combat it.

I'm not here to argue with you, LiteCoinGuy - in fact I will support any stance against censorship that you can make if you can demonstrate even once that censorship is actually occurring. If you continue to act in an immature fashion, neglecting to have a mature, logical conversation and simply continue to spout nonsense instead then there's no point in me continuing to engage with you on the topic because you're not making any valid arguments to support your position.

Demonstrate where censorship of free speech is occurring here and I will ensure such censorship does not continue. Otherwise you're showing yourself up to be coming from a position of childish, wholly nonsensical opposition solely for the sake of it.

You may also wish to re-read the definition of 'suppression' - it means "to forcibly put an end to" or "prevent the dissemination of (information)". Nobody is forcibly putting an end to you posting your opinions here, nor is anyone preventing the dissemination of any information that you wish to put forth. However, that is occurring over on bitcointalk and /r/bitcoin, and as this is the case I trust that are you going to tackle that issue in those respective fora? Yes? Or will you simply decline to do so and show yourself up to be a hypocrite?


This forum was started so that everyone could express his opinion and i am just doing that. Stop the censorship!

Indeed it was, and you continue to be free to do so. When you can point out how you are not free to do so then your screams of "Stop the censorship!" will be a cause I will completely rally behind and fully support you on. 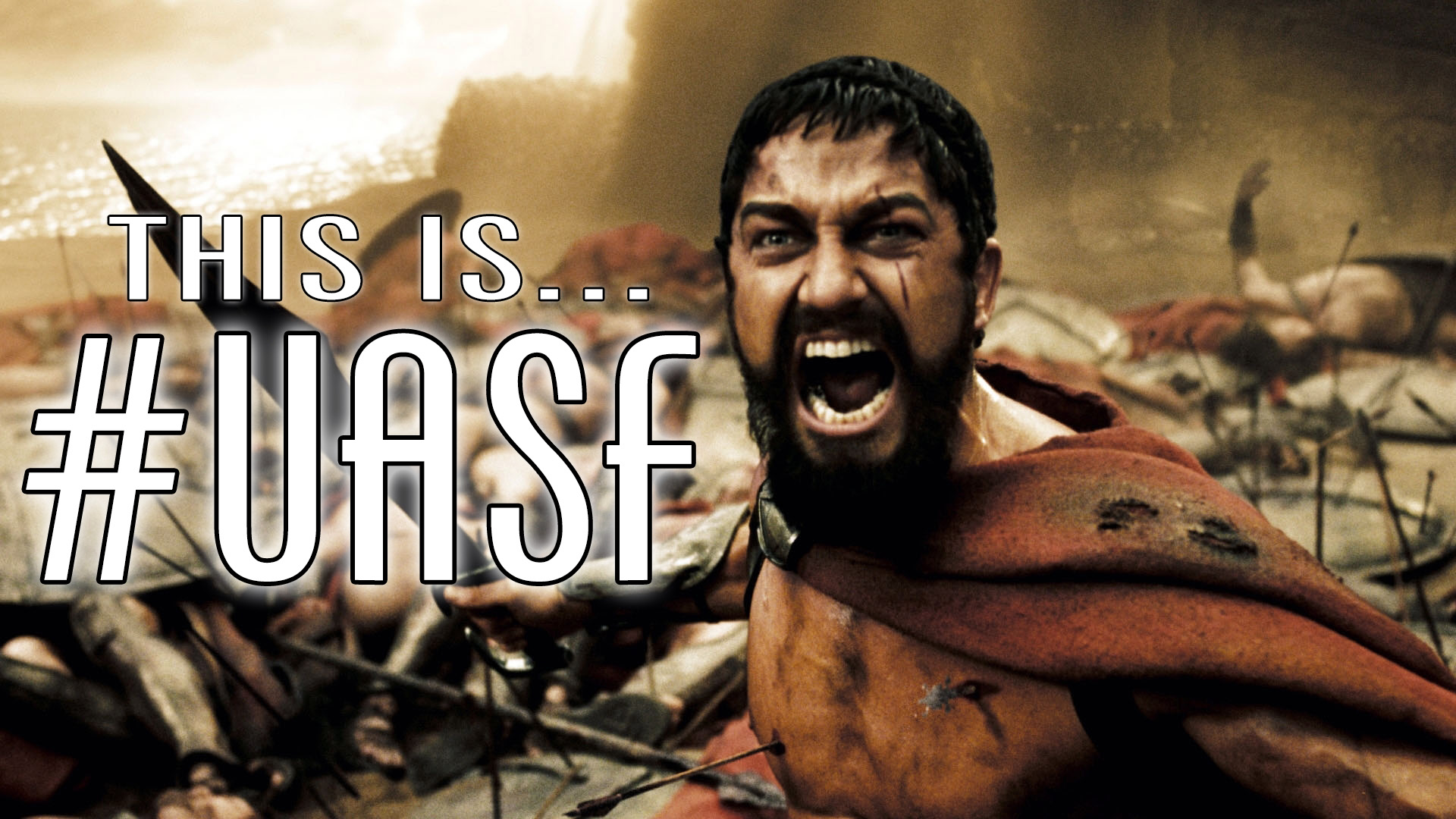 BitcoinXio, please stop downvoting members when you don´t agree with their opinion.

What will happen when my reputation is zero or sub zero which is BitcoinXio goal? I get banned. I know that is the goal but i have to speak up against this blatant censorship and vote manipulation that is happening here! How can any mod who joined this forum a few years ago be ok with that? BitcoinXio should be ashamed of himself for what he is doing here and for harming bitcoin - just for a few dollars from Roger?! Sad. 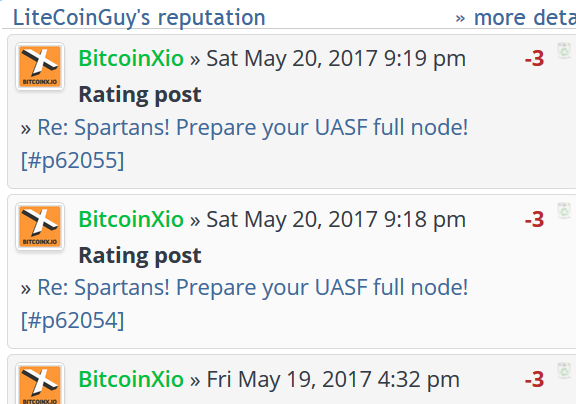 LiteCoinGuy's moderator privileges were not removed when he was removed from the moderator group - this was a failing on my part.

I checked the forum to find a moderator (BitcoinXio) banned and my own post(s) edited. He was sitting on moderator access biding his time until he could cause damage. I should be shocked but honestly nothing from him surprises me anymore.

LiteCoinGuy, as you have acted maliciously against this forum, its users and attempted to censor others I am posting a screenshot with all relevant information exactly as is: 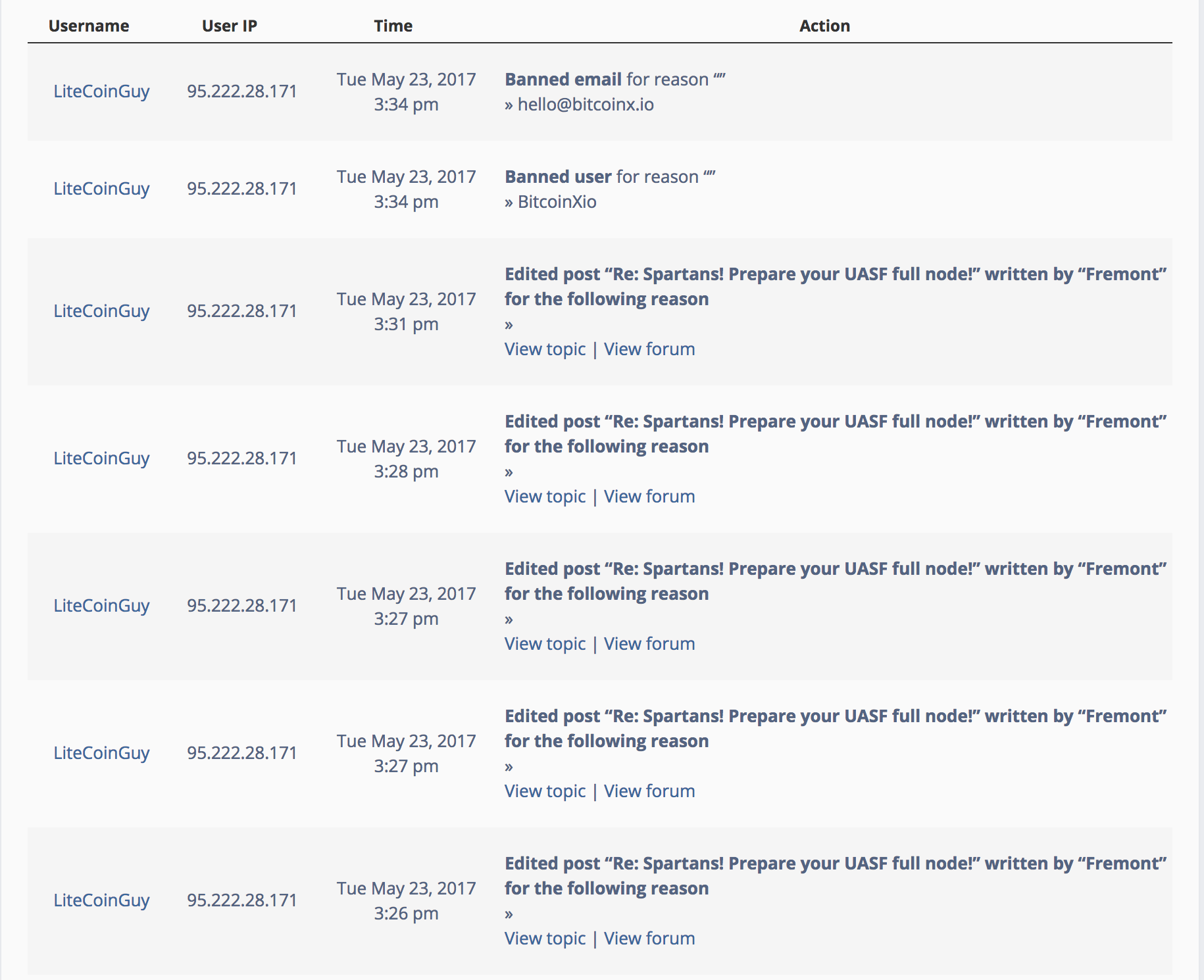 How dare you engage in such childish behaviour and have the gall to complain about some non-existent form of 'censorship' here when you do something like this.

You're toxic in the extreme.

LiteCoinGuy, as you have acted maliciously against this forum, its users and attempted to censor others with I am posting a screenshot with all relevant information exactly as is:

How dare you engage in such childish behaviour and have the gall to complain about some non-existent form of 'censorship' here when you do something like this.

You're toxic in the extreme.

LiteCoinGuy, you are beyond help. You came into the forum today and acted with extreme malice when you deleted my posts and other's posts, banned me, and edited other's posts to try to fit a narrative that you wanted. You are despicable and everyone should know how disgusting you have acted and what a toxic person you are.

Thank you Fremont, Hans, and other forum admins for acting quickly and restoring all the things LiteCoinGuy deleted/changed today.
◉ Get started with Bitcoin today!
◉ Buy bitcoin with your credit card
◉ Choose a Bitcoin wallet to secure your bitcoin

What will happen when my reputation is zero or sub zero which is BitcoinXio goal? I get banned. I know that is the goal but i have to speak up against this blatant censorship and vote manipulation that is happening here! How can any mod who joined this forum a few years ago be ok with that? BitcoinXio should be ashamed of himself for what he is doing here and for harming bitcoin - just for a few dollars from Roger?! Sad.

You are such a lying, trolling scumbag.

You will not be banned. I know this because I have personally asked the mods what would happen to my account heading towards negative reputation because of you downvoting my posts.

Stop lying. You only demonstrate yourself to be a deceitful and untrustworthy troll.

Discover the Best Bitcoin Gambling sites on the Internet

Users browsing this forum: No registered users and 11 guests