I Support UASF For Segregated Witness

I coauthored BIP-9: in particular, I chose the state machine to time out activation after 1 year. I figured it was a useful checkpoint in case an update proposal had a flaw, or (more likely!) someone came up with a far better idea. This way, miners could kill it without forcing everyone to upgrade.
My mental model was that miners are a subset of bitcoin users, similar to the way a jury is a subset of your peers. I hadn’t expected that this checkpoint would be used as a chokepoint to ransom the network. This significantly changes the risk model; BIP-8 is now a far superior method for network upgrades, where miners can only accelerate the process, not block it.

Meanwhile, everyone is eager and prepared for Segregated Witness (especially us Lightning developers!). Waiting another 18 months for activation via BIP8 would mean over a year of frustration against the broad consensus of the Bitcoin ecosystem.

In a miner-activated soft-fork, 95% of the miners can push the other 5% off the network (rejecting the now-invalid blocks they produce), after a two-week “lockin” period. In the BIP-148 user-activated soft-fork, the users push any number of miners off the network on August 1st if they don’t signal support (a trivial change for any miner), then about two weeks later the “lockin” period begins just like a miner-activated soft-fork. The miners have plenty of notice to start signaling now, an easy upgrade option if they’re caught by surprise, and four weeks to make good on their commitment to support Segregated Witness (which can be done without actually upgrading if they want to).

My full node now signals for the UASF. I will upgrade it soon to support the UASF, and actively advocate that my fellow bitcoiners do so too.

Re: Rusty Russell: "I Support UASF For Segregated Witness TL;DR: It’s my fault and I’m sorry. Let’s fix it." 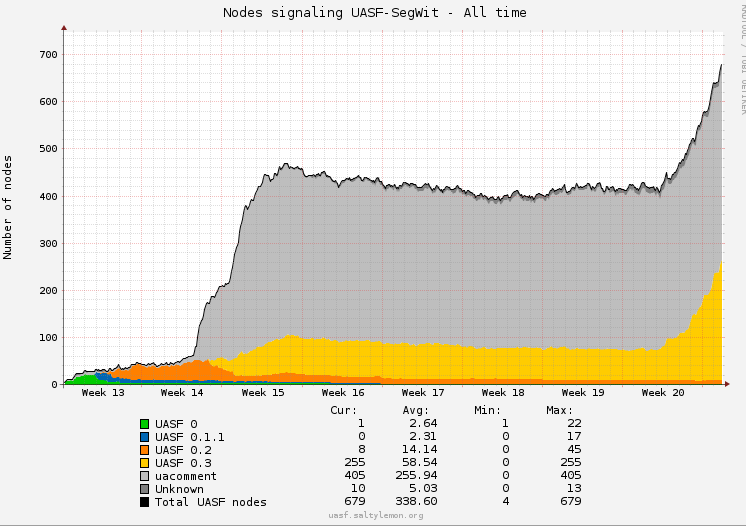 Re: Rusty Russell: "I Support UASF For Segregated Witness TL;DR: It’s my fault and I’m sorry. Let’s fix it."

Users browsing this forum: No registered users and 14 guests