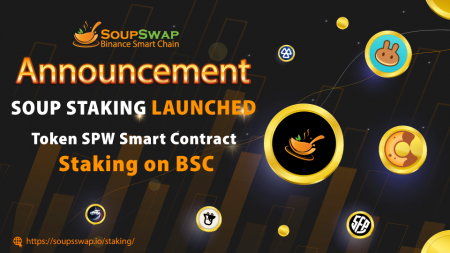 We are excited to introduce Soup Staking which is one of the elements in SoupSwap ecosystems.
The continual growth of our network has only become possible with the overwhelming support and demand from the community.

Soup Staking is a way of providing financial services to users through smart contracts. Existing DeFi projects aim to provide higher annualized earnings for specific currencies.
There’s a relatively high threshold for users of Soup Staking products. Soup Staking acts on behalf of users to participate in certain products, obtains and distributes realized earnings, and helps users to participate in products with a single click.

The Features of Soup Staking:

- We provide the platform to place fixed resources in the blockchain. For the set-up of them, SoupSwap depends on transaction values.
- Staking is conducted with validation jobs that lock your coins to be randomly selected in the protocol at a specific time to generate a block. Normally, participants with large sums of money have a high chance of being selected as validators for the next block.

The Advantages of Soup Staking:

1. Easy to use: You don’t need to manage private keys, acquire resources, make trades, or perform other complicated tasks to participate in Soup Staking. Soup Staking’s one-stop service allows users to obtain generous online rewards without having to keep an on-chain wallet.
2. Funds are safe: Soup Staking selects only the best DeFi projects in the industry and monitors the Soup Staking system in real-time while it’s running in order to reduce the risks associated with such projects.
3. Higher earnings : Soup Staking does away with the exorbitant fees that come with trading capital. With the consistent level of risk, users are able to earn the highest possible returns in the best way.

Soup Staking opens up many roads for anyone wanting to participate in the consensus and governance of blockchains. Furthermore, it’s an extremely easy way to earn a passive income simply by holding coins. Barriers to entry to the blockchain ecosystem are getting weaker with increasingly easy staking.
SoupSwap thanks for the support of our community and look forward to growing the SoupSwap ecosystem further.
Post Reply
1 post • Page 1 of 1

Return to “The Forum”