None of the ICO's linked anywhere on this forum are endorsed by Bitcoin.com; users must do their own due diligence on any company / site linked to within this forum.
Post Reply
456 posts

SmartNodes should be launching around the 8th-11th with the guide being released on the 8th.

SmartNodes are online!
To run a node you will first have to update the wallet to v1.1.0 for SmartNode support --> https://smartcash.cc/wallets/
FAQ:
If any questions arise, please join our Discord at discord.smartcash.cc and join our dedicated #SmartNodes channel .
Azuuri - SmartCash.cc Outreach Hive

SmartCash can now be traded on CryptoBridge decentralized exchange! Video-Tutorial: How To Set Up A SmartNode (Mac) https://www.youtube.com/watch?v=Qkhj1SaDJZA If any questions arise, please join our Discord at discord.smartcash.cc and join the dedicated #SmartNodes channel .
Azuuri - SmartCash.cc Outreach Hive

SmartCash is the main sponsor of Anarchaforko and by joining this competition you have a chance to join it and meet some of our team members there!

SmartCash will implement the "send to email" feature soon

CoinExchange has re-enabled deposits and withdrawals. You can now use CoinExchange again!
Azuuri - SmartCash.cc Outreach Hive

You now have an easy way to convert SmartCash into other cryptocurrencies and vice versa without registering an account.

The option to exchange SmartCash for hundreds of other cryptocurrencies and tokens has now become available on CryptoWolf.eu https://twitter.com/scashofficial/statu ... 8684196865
Azuuri - SmartCash.cc Outreach Hive

SmartCash is one of the Anarchapulco gold sponsor and the main Anarchaforko sponsor! Make sure to check out http://anarchapulco.com & http://anarchaforko.com! Looking forward to see some of you guys there next week!
Azuuri - SmartCash.cc Outreach Hive

Be sure to check out and enter our third SmartCash Writing contest with 5.000 $ in prizes!

Video: Be SMART and mine SmartCash https://www.youtube.com/watch?v=pgWg_psWkg8 If any questions arise, please join our Discord at discord.smartcash.cc and join the dedicated #mining channel .
Azuuri - SmartCash.cc Outreach Hive

Video: Stirred, one of our SmartCash developers being interviewed about SmartCard https://www.youtube.com/watch?v=--mMzrmzoxs If any questions arise, please join our Discord at discord.smartcash.cc and join the dedicated #smartcard channel .
Azuuri - SmartCash.cc Outreach Hive

The new SmartCash web wallet is live! Make sure to clear your browser cache (CTRL+F5) ! https://twitter.com/scashofficial/statu ... 9192809473
If any questions arise, please join our Discord at discord.smartcash.cc and join the dedicated #web_and_mobile-wallets channel .
Azuuri - SmartCash.cc Outreach Hive

Meet two of our devs, Enrique and Stirred

SmartCash is now on ad-free and free-speech platform gab.ai! 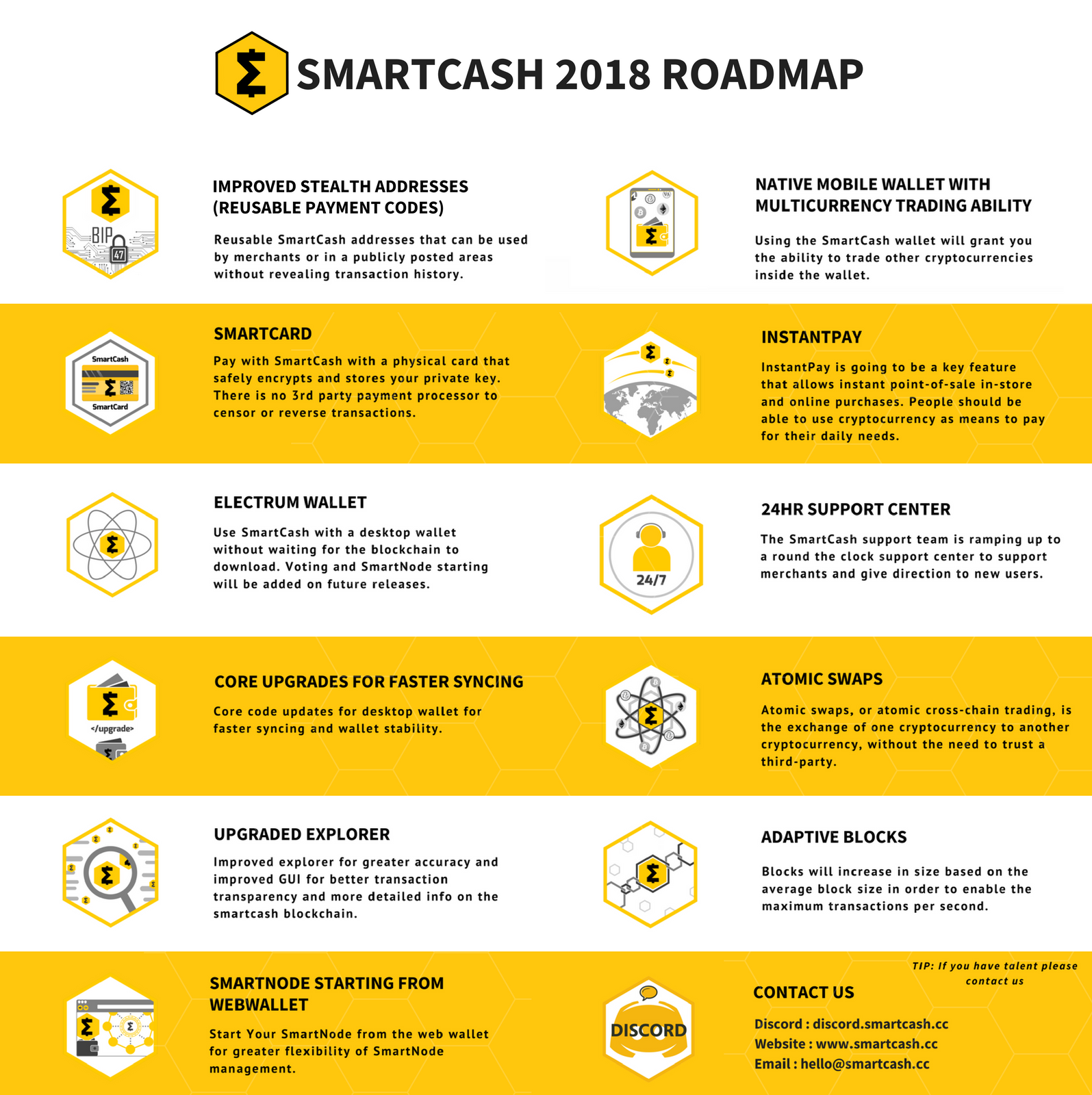 Help SmartCash to get listed on Binance and get rewarded! Join our Bounty now!

Vote for SmartCash and get rewarded!

This is a post that needs to be made. These guys pumped this coin so that a ton of us bough smartnodes when the price was above 60,70,80 cents, even above $1.00, only to 'botch' the launch of the masternodes and implement a 'lottery' system that happened to pay out them and their friends 10 times over before anyone else got a payment.

Now they claim they have 'fixed' that, as of the end of January, except every time most of us are supposed to receive a payment (EVEN AFTER IMPLEMENTING THE CRON JOB SCRIPTS) our node magically needs to be restart, putting us to the back of the queue. What a coincidence that every time I hit 4 days enabled, i need to restart it. I mean, who wouldn't think that's a coincidence except every other person too afraid to speak up because they don't want to lose ALL the money they put in?

Today, I once again confronted the Smartnode channel on Discord, to which i was immediately attacked by Lex (corrupt and leeching off OUR payments) who started calling for a ban. I have been threatened with this before, when i brought it up after the second time i missed a payment, but i got too frustrated with this node and stopped caring until today.

Today I realized that this is my 12th day without a payment, while the devs and their buddies are fleecing the payments left and right and profiting off this situation where they're screwing the rest of us out of our payments.

After going into the discord and telling everyone what was going on, that the devs have clearly scammed us with the smartnode launch, i was banned.

I paid SEVEN THOUSAND DOLLARS for my smartnode and have received ONE PAYMENT in the fucking month since the launch of the nodes. Seven thousand dollars for something now worth two thousand, and no ROI at all because I am not receiving payments.

If they did this to me, they will do it to you. They shouldn't have banned me because now I am going to be forced to plaster everywhere with the proof of what they've done and everyone will realize how badly we've been scammed.

This masternode launch was intentionally set to send payments to the devs and their friends, and when it was exposed they claimed it was an error in the code (what a lucky error for them), and that they fixed it. This was all planned. They have fleeced this community for enough and this needs to be stopped.

Do not let them silence anyone else who is trying to expose them, scum like this needs to be eradicated from our community. It is people exactly like these devs and people like Lex that give our community a black eye to the entire world, and who will force regulation because they can't stop scamming and deceiving people.

If this wasn't a scam, why would they be so quick to silence and ban anyone speaking out?

They have now banned me from their sub and from their discord. They have banned someone who invested in their platform on good faith who had the audacity to question why the devs and their friends are the only ones receiving payments.

Since we can't compete with bot farms and sweatshops, we have to suspend the Binance Voting Bounty. Users who submitted the form will stay eligible and receive their SMART. Thanks to all of you who voted the legit way and supported the SmartCash community!

Users browsing this forum: No registered users and 13 guests